The Southwest corner of Saint Nicholas of Tolentine Parish, now known as West Lawn, was burgeoning. The Pastor, Monsignor Michael Fennessy, spoke to Cardinal Stritch about the need for a new parish. On July 7, 1948 the Cardinal appointed Reverend Joseph McGuire to form a new parish to accommodate the many people buying homes in the area.

Our name, a title of Our Lady, “Saint Mary Star of the Sea,” was given to the new parish by Father McGuire. It is said that the name was taken from a prayer by Saint Bernard that Father McGuire had carried in his prayer book for a long time. Ground was broken for the church (a Quonset hut) on September 9, 1948, and the first Mass was offered on December 19, 1948. On Christmas Eve, as more than 600 people were streaming into that tiny church for Midnight Mass, “The Bells of Saint Mary’s” could be heard wafting through the cold, crisp air, coming from the carillon at our neighboring church, Calvary Lutheran Church. What a wonderful display of welcome and hospitality!

Father McGuire requested help on weekends from Saint Rita High School and soon Father Frank Crawford, O.S.A., and Father Edward LaMorte, O.S.A. were “adopted” by our parish family. It didn’t take long for our women to get organized and on December 29, 1948 the first Altar and Rosary meeting was held. The Holy Name followed soon after and their meeting was held on January 9, 1949 in the sacristy.

In June 1949 Father William McErlean, newly ordained, was assigned to Saint Mary’s. Ground was broken for the school and convent on August 13, 1949 and seven Adrian Dominican sisters arrived in August, 1950 to open the school with Sister Eileen Cecile, O.P. selected as the first principal. Cardinal Stritch dedicated the school and convent on September 10, 1950 and our long history of quality education began.
*********************
Rev. Stephen Duggan 1950-1975
Saint Mary’s parishioners suffered a great loss on September 29, 1950 when Father McGuire died suddenly while on vacation. On the day of the funeral, Cardinal Stritch appointed Father McGuire’s close friend and classmate, Father Stephen Duggan, Pastor of the Star. He came, rolled up his sleeves and dug in.

Our original school was built to accommodate 600 pupils, but in three years the community had grown so fast that we had 800 students enrolled. On May 19, 1954 we broke ground for a new church and additions to the school and convent. Over 400 men answered Father Duggan’s plea for help with the building fund campaign.

The first Masses were offered in the new church in June, 1955 and the nine o’clock Mass was filled to capacity with men from the Holy Name Society. The young families in Saint Mary’s were very parish community oriented, helping at school and church activities alike. Our Pastor and Associates were always there, and so were the parishioners.

In July, 1957 Father McErlean was transferred and Father Peter Dunne, also newly ordained, replaced him. Since our school enrollment was now 1,300, four more classrooms were constructed in the south school basement. Our children attended classes in two shifts, from 8:00 AM to Noon or from 1:00 PM to 5:00 PM.

Our parish was always very much a part of the community. Proof came during Thanksgiving week in 1959 when a cargo plane crashed and damaged homes from the railroad tracks to Kilpatrick. The children from that area were fed and kept in school until parents came to pick them up.

Membership grew so quickly that we had to use the new church plus the chapel for Sunday Masses. Father Ed Gunia joined our staff in August 1959. The third building project was started in May, 1961 for a new rectory and additions to the church and school. Father Dunne was transferred in 1962 and Father Bill Narlock joined our staff. A new school building with twelve classrooms was opened in September of that year.

From day one our parishioners’ roots were from many different ethnic groups. In 1964 Father Ed McLaughlin came to reside here while teaching at Quigley South and in 1966 Father Tom McHugh replaced Father Gunia. By this time the neighborhood was settled down and there were few empty lots. Over 3,000 families were registered; most were young, ambitious and very parish minded. Our school enrollment peaked at 1,500 students. Our yearly “Stars Bazaar” was a terrific fundraiser that continued through 1985 when the annual “Startime” shows replaced it until 1991. We had large memberships in the Holy Name, Altar and Rosary, Teen Club and Senior Citizens groups.

Father Robert Lutz came to us as our third Pastor in August 1975. That same year we said goodbye to Father Reed and welcomed newly ordained Father Bob Spielman.

In 1976 we were introduced to Eucharistic Ministers of Communion and the Saint Vincent DePaul Society was formed. At about the same time Mr. Michael McMahon was hired as our Director of Liturgical Music, and we were assigned our first seminary Deacon, Jim Mezydlo who would be at The Star for six months of “on the job” training. Mr. Emil Gembara was ordained in 1977 to become our first permanent Deacon. Because of our leadership abilities and the size of our parish, many seminary Deacons were sent to us over the years: Dan Cassidy, Ted Perzanowski, Ed Cronin, Tom May, Mike Gabriel and Bob Barron.

Sister Dolores Blahaus, Director of Religious Education replaced Sister Georgene Wilson who had served here for several years. John McHugh was ordained as our second permanent Deacon in 1978. When Father Fanelli left in 1979, Father Joe Mol was sent to replace him and we said good-bye to Father Richard McGrath, O.S.A. A new Parish Youth Organization (P.Y.O.), as well as a group for widows and widowers, and the separated and divorced (Phoenix) were formed. Another parishioner, Greg Serratore, was ordained a permanent Deacon.

Father Spielman was reassigned in 1980 and Helen Gabel was hired as the Youth Minister. We celebrated Father Lutz’s 30th Anniversary of Ordination and welcomed Father Michael Meany, a newly ordained. Sister Terri Grasso, S.P. accepted the newly created position of Pastoral Care Coordinator, facilitating ministry to the home bound and the hospitalized as well as bereavement ministry. Frank Beata, organist for many years, left and Arlene Michna joined the staff.

When Sister Dolores left her position as D.R.E. in June, 1984, Mary Jeanne Pazin assumed these responsibilities and remained until 1993, then Leslie Krauledis arrived. Leslie continued serving Saint Mary’s until June, 2003. Terry Navarro willingly took on these responsibilities after leaving her pre-school teaching duties. Father Lutz, who had been our Pastor for nine years, left to assume his role as Pastor of Saint Norbert’s in Northbrook. The renovation program that he had directed enhanced the beauty of the parish buildings and enabled a more sacred celebration of liturgy. He also brought about spiritual renewal, coordinated parish organizations and oversaw the running of our large school. Shortly thereafter, Father Mol left The Star after being part of our joys and sorrows for six years.
*********************
Rev. Laurence Kelly 1984-1992
After eight years Mike McMahon entered the seminary and today serves as a priest in the Archdiocese. Arlene Michna took over as Director of Music. Father Meany did a great job as our Parochial Administrator until the arrival of Father Laurence Kelly, our fourth Pastor, in 1984. Father Gery Stefanski served the people of The Star from 1984-1990, Father Mark Simpson from 1985-1991, Father Marty Michniewicz from 1986-1993 and Father Gene Smith from 1993-1994. In 1990 Jesse Navarro was ordained a permanent Deacon. Following the departure of Sister Terri in 1985, Helen Gabel assumed the newly created position of Pastoral Associate and a new Youth Minister, Laura Dawson, became part of our staff. Helen continued on with Saint Mary’s until her retirement in June, 2003. Terry Navarro took over the responsibilities of this position.

Greg Serratore, as well as being one of our parish’s permanent deacons, took on the role of our first Business Manager in October of 1995.

In 1996 a Noise Abatement Program saw the government soundproof, air condition and renovate our two school buildings. In December of 1997, the parish purchased the building at 63rd and Knox that had been rehabilitated into a Parish Center by the skilled volunteer work of our parishioners. It serves as a sports center under the direction of our Sports Association. In February 1998, a Parish Endowment Fund was established as an investment in our future.

Our Music Director Arlene Michna left in 1993 and was succeeded by Mrs. Patricia Zeleznak, in 1995 by Mr. Jim Scavone and in 1997 by Ms. Janice Goff. We were fortunate to have John Toner fill in as organist, followed by Augustine Mallak until June 30, 2002, followed by Gia Soukas in August, 2002. John remained part-time until August, 2004. From 1991 to 1998 Father Bob Kilbridge, a Dominican priest was a beloved Associate Pastor at The Star. Father Ralph Zwirn left teaching at Quigley Seminary and joined our parish as Associate Pastor in July 1995. Father Ralph then left the Star in November, 1998 to become Pastor of our neighboring parish, St. Turibius.

Over the years we have had seven of our parishioners participate in the Archdiocesan Lay Ministry Training program: Judi Kaczmarski, Mary Fran McKnabb, Nora McDermott, Jan Rohacik, Dawn Headtke, Terry Navarro and Greg Sobotka. Most of them remain active and vital in various ministries in our parish. After completion of her training, Jan became a part-time member of the Pastoral Staff as Coordinator of Ministry of Compassion. St. Mary’s continues its relationship with the Augustinians. In 1993 a small group from St. Rita’s former monastery took up residence and founded St. Monica’s Monastery in the Kelly Building, our former convent. Father Thomas McCarthy, from St. Rita High School, served as a presider at our weekend liturgies. Father Tom became principal of St. Rita High School and we thank him for all his years of service.

The school now has an enrollment of approximately 500 students. In addition, our Religious Education program for children not enrolled in our school continues under the direction of Mrs. Terry Navarro.

In September, 1998, Father Antony Arravindassery came to us as an Extern Associate. Father Tony remained at Saint Mary’s until he was reassigned in July, 2004 to Prince of Peace Parish. Father Marek J. Duran was newly ordained in May, 2004 and arrived at Saint Mary’s in August, 2004 as Associate Pastor. Effective July 1, 2007, Father Marek was reassigned to Our Lady of Perpetual Help Parish in Glenview. 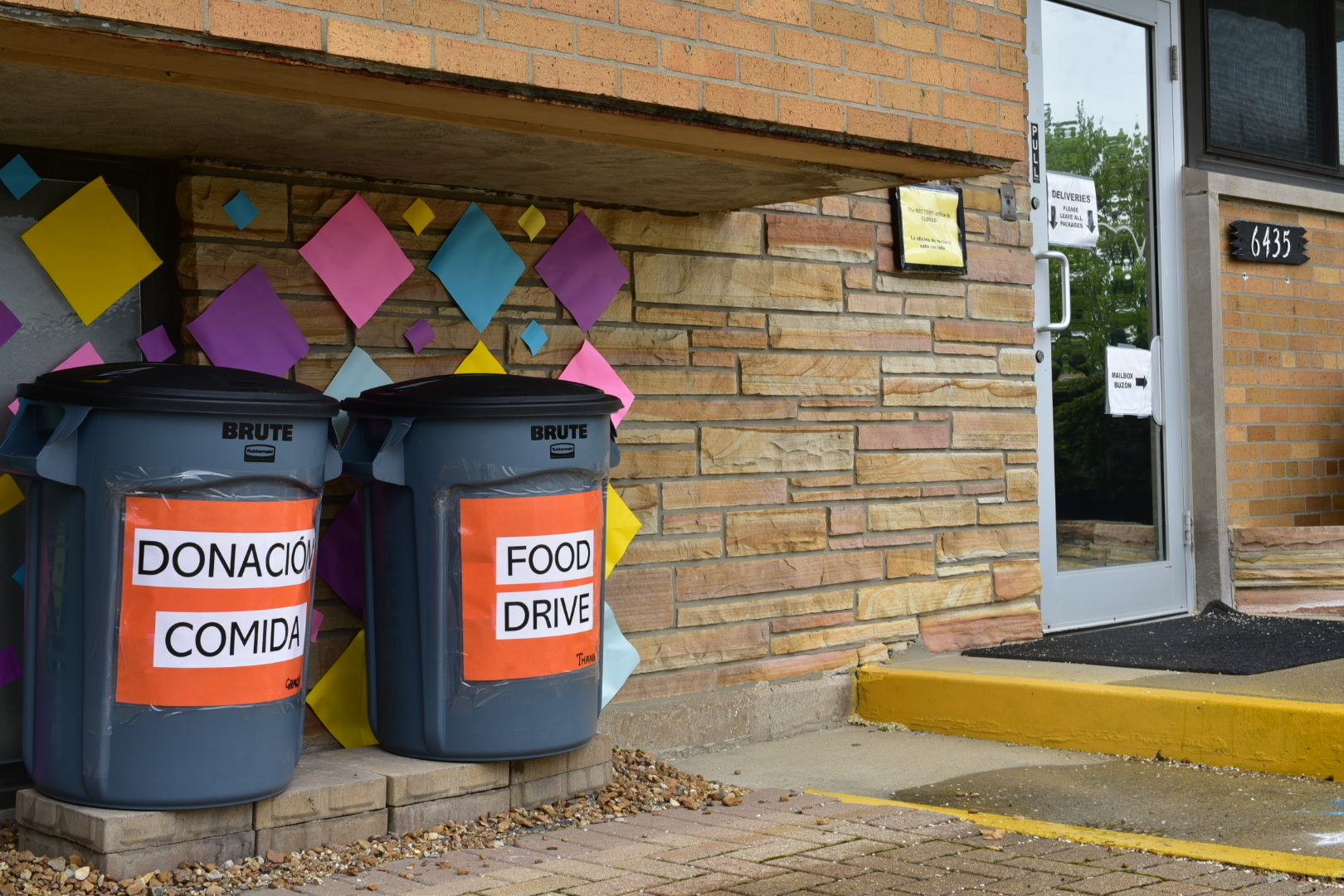